With 2017 AP Chemistry Reading finishing a few days ago, we have now begun to hear from some of the readers with their notes and reflections regarding the grading of the 2017 Operational Exam. I wanted to collate all that I have heard about the reading in this blog post, together with some data released by the College Board.

At the end of next month at ChemEd 2017, the TDC (test development committee) will provide their first official insight into the exam with the traditional “debrief”. At that meeting more details will emerge. I will report on that from ChemEd 2017 when it occurs in late July, but for now, here are some provisional observations.

It should be noted that I was not at the 2017 AP Chemistry Reading (the College Board won’t have me), so all that you read here is second-hand, but I believe it to be reliable and accurate. It’s incomplete because only a few people have chosen to share their thoughts regarding the questions that they were involved in grading. Honestly, not many revelations here, BUT a few interesting/confusing/annoying/contradictory things. 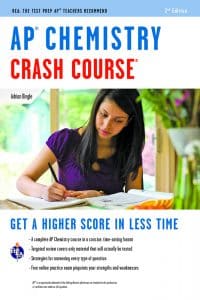 In part (a), one common error was using the wrong R. That’s why I wrote this post! In part (c), some kids tried to seek complex structures with “better” formal charges that the simplest structure that obeyed the octet rule. I’ve been warning against this for years (since 2008, actually)!

In part (c) there is a real problem. Apparently, the acceptable range of bond angles was 104°-110°. However in 2015, another molecule with 2BP/2LP had a wider acceptable range (in question 2(e) form 2015, 100°-115° was acceptable for the C-O-H bond angle). The changing of acceptable range, if true, is a HUGE, HUGE, HUGE problem. How on earth can a kid who studiously read the scoring standards in 2015 and saw that a 2BP/2LP system was credited with a certain range, then be told that in 2017 the same system (albeit on a different molecule*), has a different range? That’s just not acceptable.

*clearly there would be no expectation for a student to know anything about the specific bond angle ranges that the two different molecules ACTUALLY exhibit.

Only 6% of students scored 8 points or higher. A great many got none of the first two points largely because …

… apparently many teachers appear to have abandoned teaching formal charge! This is purely and simply an error on their part, and one that actually costs kids points on the exam. Teachers are wrong to omit FC, and have either not read the CED, or have “read” it, but think that the exclusion statement that says, “The use of formal charge to explain why certain molecules do not obey the octet rule is beyond the scope of this course and the AP Exam”, means that formal charge is no longer tested – it doesn’t mean that at ALL!

An incorrect unit for the rate constant in part (e)(ii) undid all of the good work in calculating the value and scored zero points. Sometimes units are totally irrelevant, sometimes they bite, however there are two things that I would add in this situation. Firstly, the question actually asks for units – so no excuses there. Secondly, the necessity of assigning units to rate constants is so well established in the AP course going back decades, that this should simply be a reflex for a student.

For part (e) one table leader commented, “It was astounding how many students failed to see that constant half life implies first order.” That’s surprising to me, too, since it’s the first thing that I teach in terms of order recognition from graphs. That table leader went on to say, “A very common response was “a graph of ln conc vs. time gives a straight line, so it is first order.”” I would anticipate this, but it scored ZERO points! The question says, “Explain how the data support the…rate law.” It was decided that they had to show the data. If the student showed ANY ln data in part (e)(i) they got the point for the graphing explanation. But what if the student actually graphed the data on a calculator? The compromise decision was, if the student wrote “When I graphed ln conc vs. time, I got a straight line …” the point was awarded. If the student wrote anything suggesting that they actually graphed data, the point was awarded, for example “My graph showed that…” etc. The argument against this was that mentioning their calculator does not show any more chemistry knowledge than simply stating that the graph was linear. How do we know which students (absent data) actually developed graphs?

At least one person vigorously objected to part (b) even being asked. That person’s argument is that the concept of Rf values is not in the AP course since there is no LO that deals with it. The LO that does deal with chromatography is 2.10, and says, “The student can design and/or interpret the results of a separation experiment (filtration, paper chromatography, column chromatography, or distillation) in terms of the relative strength of interactions among and between the components.” I see where that person is coming from, BUT the word “interpret” is perhaps deliberately ambiguous. I teach Rf values.

Electrochemistry is poorly understood – who didn’t know that? Although I suspect that the average scores are skewed with it being question 7, by which time tons of kids would have given up. Seen on one paper, “My teacher said she was not interested in the exam, she was preparing us for college. I just gave up once she said that...” – that makes me weep for the kids.

The average scores for each question can be found in this post.