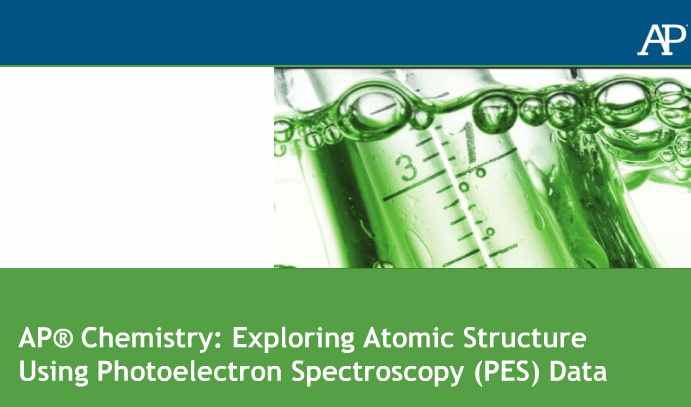 The College Board finally got around to releasing some official information about PES yesterday, Friday January 31st. This is information that should have been available to teachers BEFORE the new course started in August of 2013, so it’s approximately 6 months late but even though it’s better to be late than never, it still exposes a fundamental issue with the CB and communication.

The Webcast can be found here and is almost 51 minutes in length with 60 separate slides. Why so long? Well there’s a lot of extraneous information in it (rather than cutting straight to the chase about what can be on the exam and how it can be asked), and plenty of references to one of the latest CB obsessions of, ‘the evolution of new evidence driving theory’. There are also (helpfully) a few, sample questions given, but busy AP chemistry teachers can easily ignore slides 1-12, 52 and 59-60, and still get all the information that they need.

1. Because of the new curriculum obsession of the idea of ‘data/evidence driving the evolution of atomic theory’, I do worry that we could still see a multiple-choice question, similar to ones we have seen in the past, that asks about some historical reference to experiments by Rutherford, Bohr etc. I *think* that could dovetail with LO 1.13 or even 1.12, but it’s a bit muddy to say the least, but then again, so much is! Slides  13.1, 15 and 49, all seem to emphasize the data driven angle that they have fallen in love with, so you have been warned!

2. There is information in the webcast about the inner workings of the PES machine. Despite this, I cannot imagine that this would ever be asked on a question, so I think this is just extra information that is an attempt to hep explain PES given it’s in none of the texts! Additionally, there’s nothing in the LO’s to suggest that a question about the machine itself, could ever be asked.

3. Real spectra, in addition to simulated ones, ARE presented. Real spectra are much more complicated in terms of the ‘noise’ surrounding the relevant peaks (partly because of Auger transitions), and as such I think that if real spectra did appear on the exam they would HAVE to be accompanied by labels that identify specific peaks.  In fact, when real spectra are presented in the webcast (slides 35, 36 and 37), the peaks are labeled, and there is a reference in the commentary that suggests that peaks would have to be labeled for students on such a spectrum.

(i) Unlike in the simulated spectra, where the intensity (height) of the peak directly relates to the number of electrons in a given orbital, because the abundance of the elements in a mixture will not be identical to one another, we can see different height peaks for orbitals that actually have the SAME number of electrons as one another. This is obviously problematic, and is frankly getting way beyond what the AP is likely to ask (IMO), so I feel that it is likely, as the presentation suggests, that there is a specific consequence, namely…

(ii) …that the only questions that will come from these type of spectra (real), if they are presented, will be ones that concentrate on the relative positions of the peaks on the x-axis, i.e., the the differences between the number of protons of the various atoms, and hence the relative size of the binding energies, and not the relative numbers of electrons in any one orbital (the height of the peaks). We’ll see – maybe!*

[EDIT] *subsequently, this non-equimolar situation HAS been asked on the exam.

4. Note that units of MJ/mol, and the x-axis being consistently shown with values decreasing left to right are features of all of the spectra shown, and this probably alleviates the confusion over how things may be presented on the exam. This confusion and speculation would of course been avoided if this webcast had been available when it should have been.

Having looked at the sample questions carefully, here’s my take.

Question 1: Simple, and as predicted by me and others, this question is consistent with my materials (notes, worksheets) and earlier comments, on PES.

Question 2: Simple, and as predicted by me and others, this question is consistent with my materials (notes, worksheets) and earlier comments, on PES.

Question 3: Like question 6, this is no more than a repetition of something that ionization data can equally, adequately do. In that regard there is nothing added by PES, here. What’s the point?

Question 4: Simple, and as predicted by me and others, this question is consistent with my materials (notes, worksheets) and earlier comments, on PES.

Question 5: I hate this question, however, if you take my advice from 3(ii) above, given that the fact that (D) is the only answer that refers to nuclear charge, then one might be able to extract the correct answer without even reading the question!

Question 6: Like question 3, for me, this question does nothing that ionization energy data don’t do, so why bother? I don’t think that PES is offering anything new here, and in fact I’d go further. I think that it is arguable that the ionization data illustrate the point better than the PES data, or at least just as well. Having said that, I suppose my feelings may be because of the familiarity I have with IE data, versus the relative unfamiliarity I have with PES data. Either way, I still walk away thinking that PES is an unnecessary addition to the course

Slide 47 gives us the annoying edubabble of ‘formative assessment’, which of course just means another question! The commentary mentions the trendy clickers and hand held whiteboards which also annoys me, but putting my own prejudices to one side, and analyzing the question that is there in terms of chemistry (and not the theory of teaching), I only have one concern. I would assume, that the only thing that is important about the position of the blue, 2p peak for Al, is that it is to the left of the 2p peak for Mg, and in no way is its actual position (i.e., to the left of the 2s peak for Mg) is of any relevance. Clearly, the actual position of the 2p peak of Al relative to the 2s peak for Mg, could only be predicted with data. In that regard, an entirely acceptable answer would have the 2p peak for Al shifted a little to right, beyond the 2s peak for Mg, as long as it remained to the right of the 2p peak for Mg which, IMO, is clearly the only point of the question.

As a result of seeing the webcast I am happy to say that my TOPIC 1 notes will not be changing much. I certainly will be tweaking them (as I have been doing with tall the notes this year), but essentially I am pretty happy that my initial (blind) guess at what all of this will entail and how it might be asked on the exam, was a pretty good one. Of course, had I had this information at the correct time, guessing would not have been necessary!

Finally, on a personal note, slide 59 makes me smile. I have emailed Mr. Benigna on multiple occasions over the years and not once has he acknowledged  any of my messages. Serena Magrogan on the other hand has been most responsive – thanks Serena!

So, that’s my assessment of the webcast itself, and I will probably analyze the other, associated resources (FAQ’s etc.) in another post.