Adrian Dingle has been teaching chemistry (and chemistry alone), since 1990. The first ten years of his career were spent in and around London, teaching in a number of different institutions. He taught in both public and private schools, and in the Tutorial College sector, as well as developing an extensive one-on-one tutoring resume. In 2000 he came to the United States with his American wife, and he has been teaching at The Westminster Schools in Atlanta, GA since then. 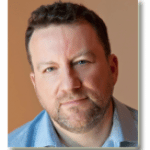 2006 saw the publication of his first book The Periodic Table, Elements With Style!, and since then he has written a number of different titles, and has been a regular contributor to many other online and hard-copy chemistry projects. His work includes projects for Barnes & Noble SparkNotes, Shmoop, The Discovery Channel, Scholastic and many, many others.

His writing has attracted several awards including, in the UK the School Library Association’s Information Book Award in 2011, and in Austria the Wissenschaftsbuch des Jahre children’s award in 2012. In the USA, How To Make a Universe With 92 Ingredients won the 2014 American Institute of Physics Communication Award.

Adrian Dingle’s Chemistry Pages the web site, has its origins circa 1998 when Adrian was teaching EDEXCEL A Level Chemistry in London. Adrian explains;

‘I had spent several years developing a word-processed set of A level notes which I handed out to the students as a basis for their study.

I became tired of photocopying vast quantities of these notes for my students, and it occurred to me that publishing them online, with the expectation that each student should be responsible for accessing their own materials, would have a double advantage. Not only would it remove a large administrative burden from my shoulders but, in a small way, it would also pass some of the responsibility for their own learning on to the students.

Common sense suggests that passing the responsibility on to the student is a positive thing. It engages students and helps them to make the connection between their actions and the effectiveness of their learning.

Web sites weren’t that common a thing amongst chemistry teachers back in 1997, making Adrian Dingle’s Chemistry Pages one of the pioneering educational sites of its time.

Further, more subtle advantages became apparent pretty quickly back in the late 90’s. By publishing homework and deadlines in a public, 24/7 type fashion, all ambiguity and misunderstandings regarding expectations of students were also removed. Many classic excuses for failure to meet those expectations were removed by the omnipresent nature of all tasks, deadlines and expectations.’

From those simple origins the site has grown to what it is today with large quantities of material added, updated and reviewed several times a week.