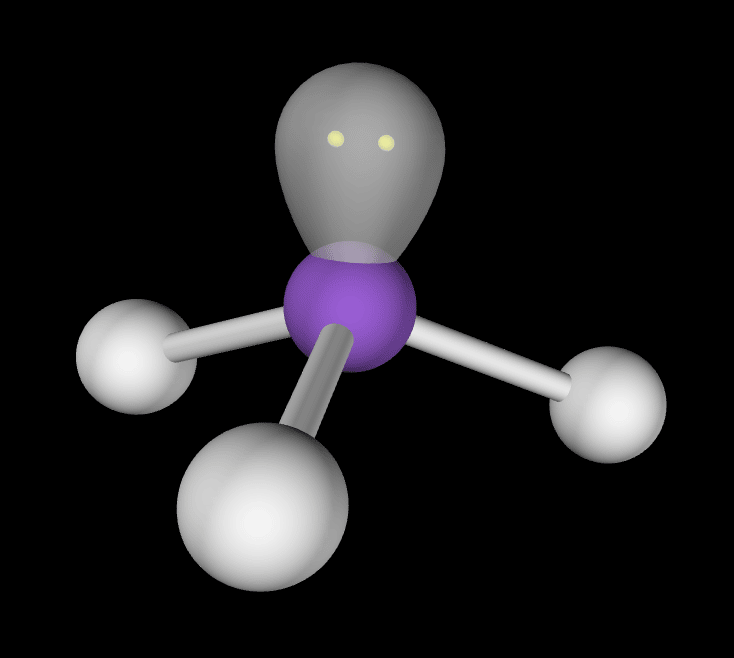 Ammonia is a pretty ubiquitous chemical substance when it comes to AP Chemistry. Not so much much in terms of actually encountering it in the lab, but rather as a molecule (NH3) that can be used to illustrate a ton of useful concepts that are required knowledge at this level. A few simple examples are;

1. It can be used to illustrate the simple theory behind Lewis diagrams, and is handy for that purpose for a number of reasons. It rather neatly involves a simple octet around the nitrogen atom, and duets around the hydrogen atoms in covalently bonded compounds.

2. When it comes to bond angles and VSEPR, a single lone pair along with three bonding pairs helps to illustrate the decreasing bond angle as the total number of electron pairs around the central atom stays constant (4), but as the number of lone pairs increase from zero in methane (109.5), to one in ammonia (107.5), to two in water (104.5). 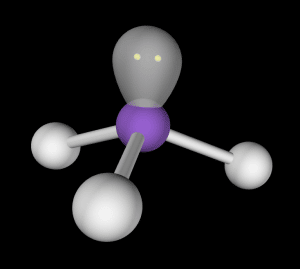 3. It’s also a handy example of Brønsted acid-base behavior with its ability to accept H+ due to the lone pair, and (even though it has been removed from the AP curriculum for some bizarre reason), its ability to act as a Lewis base by donating that lone pair.

4. As a weak base we can use it in a bunch of Kb calculations and ICE tables, and we can pair with with its conjugate acid, NH4+, to give us lots of buffer applications.

One of the reasons that ammonia is not a ubiquitous in high school labs in a literal sense (rather than theoretical one), is that it is a pungent, choking, potentially very unpleasant gas to be around. A quick look at some data taken from the CDC/NIOSH web site tells you why it’s best avoided in any quantities in high school environments.

The IDLH is highlighted in red above, and stands for “Immediately Dangerous to Life or Health“, and is defined as, “exposure to airborne contaminants that is likely to cause death or immediate or delayed permanent adverse health effects or prevent escape from such an environment.” . As you can see it is measured in parts per million (ppm).

OK, so what about the phosphorous analog of ammonia, where the N atom is replaced by the element below it in group 15? PH3 is commonly known as phospine, and will clearly be very similar to ammonia in many respects, but what about its toxicity?

Similar CDC/NIOSH data for phosphine below, shows you that by the pure measure of IDLH (which by no means is the only way to assess toxicity but aids a simple comparison here), phosphine is about six times less pleasant than ammonia.

What does that IDLH value really mean? Direct comparisons are tricky, but as a guide, carbon monoxide is much less dangerous than phosphine or ammonia with an IDLH of 1200 ppm, but nerve gases such as Sarin quoted by at least one source as being 0.03 ppm. Either way, phosphine can be deadly, and quickly.

So why bring this up now? Well tragically, last week, four people died as a result of exposure to phosphine in Amarillo, TX. Did this take place at a chemical production facility or in an industrial setting? Unfortunately not. These children died in their home after a phosphorous containing pesticide (Weevil-Cide) came into contact with seemingly benign water. The pesticide in question contains aluminum phosphide, and when it is exposed to water it yields phosphine.

I’ve written about tiny changes in structure making big differences before, and here’s another example of a small change in a molecule, followed by what might seem like the non-hazardous addition of water, causing some heartbreaking events.