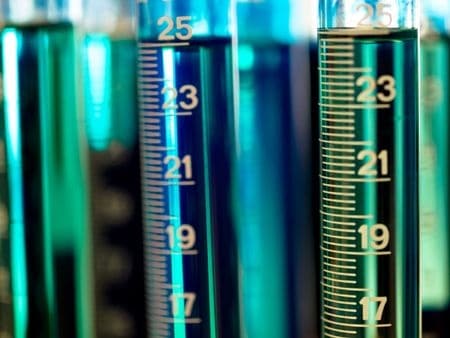 Honestly, I don’t pretend to be a good math(s) student – in fact quite the opposite is true – so me trying to explain the niceties of transcendental functions (that’s what logs are, don’t you know?) and such, is unlikely to end in either happiness or accuracy. Having said that, thanks to a lunchtime conversation with a colleague, I feel a useful blog chemistry post might result.

Firstly let me tackle my own shortcomings. I have always casually said, ‘that when one takes the log/ln of a number with units, it becomes unitless‘. This (technically incorrect) statement has never let me down, and if I am honest, I still think that it is quite acceptable to use at the AP and college 101 level since it works! When I say, ‘it works’, I mean it always yields the correct answer. However, it is more subtle than that simplification would at first, suggest.

The real deal is that you cannot take the log (or ln) of a number that actually has units, i.e., before the log (or ln) is applied, the unit must be dimensionless. You may be familiar with the concept of making quantities that otherwise have units, unitless, as being referred to as activities in chemistry. In a nutshell, the simplest description of activities (and even this is not really the full picture), is when the quantity that has a unit, is divided by some standard state unit (like 1 mol L-1 or 1 atm), in order to render the quantity dimensionless and thus convert it to a ratio. 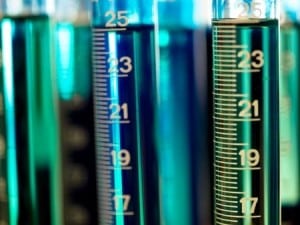 The most common application of this process at AP is when we say ‘K’ (the equilibrium constant) has no units. This can be confusing, since in expression such as the one below, it appears that the concentrations (after all that’s what [ ] stand for), do NOT cancel out, and the K value should have units of mol L-1.

In reality, all of the quantities in the K expression are actually activities, i.e., they are all concentrations in units of mol L-1, that have been divided by the standard unit of concentration, 1 mol L-1, thus making them unitless, prior to them being inserted into the K expression, thus rendering the ultimate answer dimensionless.

Having said all of that, it is still not uncommon for many chemistry applications at this level, to totally ignore the concept of activities altogether, and to still quote units for K. This can be problematic when one tries to justify units for ∆G° in the equation ∆G° = -RT lnK, for example, but it still goes on. Take this AQA A level exam question from the UK from 2004, where the answer was NOT, ‘C’. 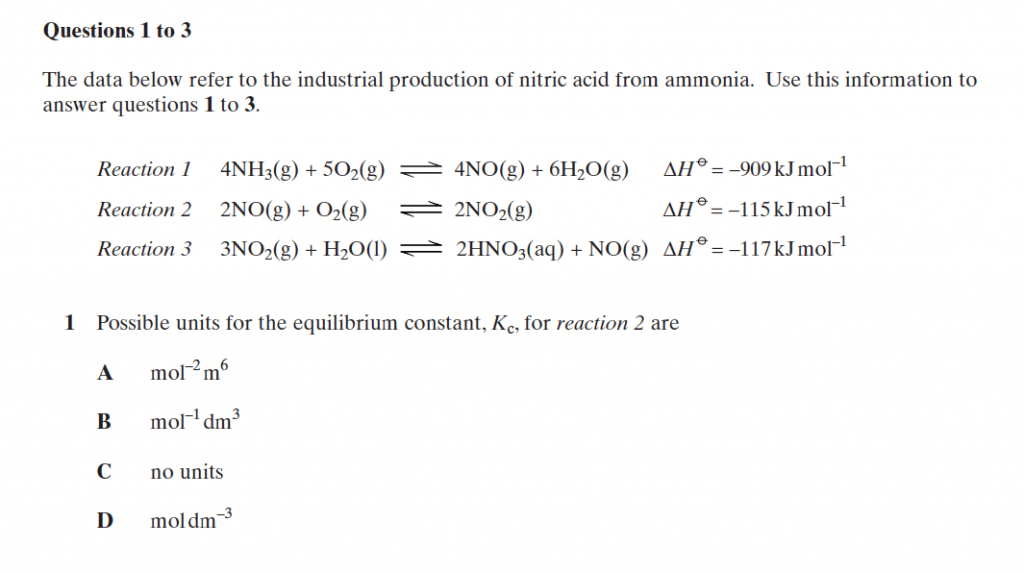 OK, so back to simply stating that ‘that when one takes the log of a number with units it becomes unitless‘. I still feel that this is the way to go in AP chemistry classes, since otherwise one would have to get into a conversation about concentrations being converted to activities in common equations that use log or ln. For example, when was the last time you saw either of these equations in a chemistry book?

I suspect that the answer is never, and personally hope that you never will. This is just another example of where math in its purest form does not serve those of us that occasionally use it to serve our purposes in various applications, and frankly the math purists are just gonna have to put up with me saying, ‘that when one takes the log of a number with units it becomes unitless‘!