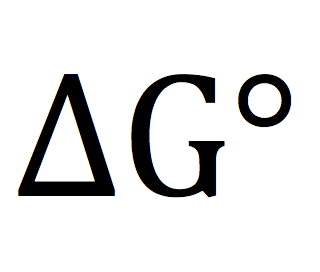 ∆G and ∆G° can be tricky things. This is partly evidenced by a post that I wrote back in January of 2012 continuing to be one of the most popular of all time on the blog. I wrote that post four years ago in an attempt to clear my own mind about the differences between the two, and it helped me a lot. Fast forward to today, and the need arises again.

I was looking at a student answer to an AP question from 2012, specifically 2(c), in which the student used ∆G° to justify an answer that I knew was wrong, but for whatever reason was causing me to lose my mind. This happens to us all from time to time of course, and eventually one gets into a mental situation where one cannot see the wood for the trees, the simplest idea continues to escape one’s conscience, and one needs a simple, ‘firm-but-gentle’ reminder about some fundamental idea from an external source. In this case, that source was retired AP chemistry teacher, Russ Maurer – thanks Russ! 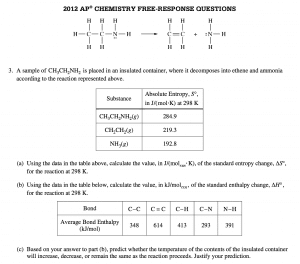 Clearly the part (c) of the question expects an answer of ‘decrease’ because of the endothermic nature of the system (calculated in part (b)). I must have given this question to in excess of 600 AP students over the years, and although kids have gotten it wrong in that time, I had never once had a student answer the question in the manner that I saw this weekend. In fact, I’d never even thought about any other answer than the correct one until this situation arose.

This particular student calculated a value for ∆G° based on the data given, and since it turns out to be positive, went on to describe how the reaction would not take place and that there would be no temperature change. Knowing this to be incorrect I causally marked in ‘wrong’ and went about my business. However, the more I thought about it, the more I couldn’t work out how I was going to explain to the student that their line of thinking was incorrect. I started with this (which I like and I think is pretty sound advice), but it still didn’t answer my own question.

I think that the key to getting the right answer is in the wording of the question which specifically says, “based upon your answer to part (b)”, AND “as the reaction proceeds”. Each of those things say to ME, “let’s not even consider ∆G° here”. I’m a HUGE proponent of not overthinking questions, and also something that I call, “the spirit of the question” which is my way of saying, ‘don’t be a smartarse”.

BUT, even bearing that in mind, I still couldn’t work out how to properly debunk the ∆G° argument – Russ to the rescue.

He pointed out to me a fundamental piece of theory that I of course knew, but had essentially ‘forgotten’. How could I forget such a simple thing? The answer it turns out is that for whatever reason, ‘we’ hardly ever refer to this fact during ∆G° calculations and discussions, and through a lack of use, the completely simple fact has fallen out of my daily discussions about ∆G°. What is it?  Well, the often unspoken necessity, that when calculating ∆G°, not only do the concentrations of any solutions have to 1.0 M and the pressure of any gases have to be 1.0 atm, but that we also have to have ALL of the reactants and products in place! This is NOT the case in the question from 2012 so we cannot use ∆G°. The reactant was “introduced into an insulated container” so the reaction cannot possibly have all of the reactants and products present at the beginning, so any calculation of ∆G° is simply invalid. Even having said that, as I describe in the post from four years ago, it’s not ∆G° that’s usually* the important thing when deciding whether a reaction is thermodynamically favored or not, rather it’s usually ∆G.

*only when the conditions ARE standard (or Q = 1) is the sign of ∆G° the determining factor.

So, because the mention of reactants and products has gone unspoken by me for so long, its emphasis has become lost. How did that happen? Well I have two theories.

Firstly, when was the last time you saw an AP question about ∆G°, that implicitly had any such mention of that criteria? Even if the words ‘standard conditions’ ARE there in black and white, I think we/I have been lulled into a false sense of security over the years. I/we don’t necessarily, intuitively think of that to mean as applied to ALL components of the reaction mixture. Most of the problems that we see in an AP context are simply plug and chug into ∆G° = ∆H° – T∆S° with the casual assumption on our part that all conditions (standard) are in place to allow one to use the formula. Examples include 2006B, 3(a) or even 2015, 2(c). Having not been challenged for years, I guess I’ve become lazy. Use it or lose it I guess.

Secondly, I teach Chemical Thermodynamics (my name for all of the enthalpy, entropy and Gibbs stuff) BEFORE I teach equilibrium, so conversations about reactants and products jousting with one another, or the fact that Gibbs Free Energy calculations are related to the law of mass action/equilibrium constants/Q/activities, never seem appropriate or easy to wrestle with, so again, the product AND reactant criteria have fallen out of favor in terms of my discussions. I’ve been OK with this approach, since as described above, AP questions have never really caused me to re-think it – until NOW!

What’s the outcome of all of this? Well because I have also become increasingly aggravated by the College Board no longer accepting a Le Châtelier argument for non-standard electrochemical cells, I am considering moving equilibrium up, to sit before electrochemistry and before thermodynamics in my sequence for next year. A potentially very profound change arising from such a simple thing.