Running the stadium steps is not ‘fun’ 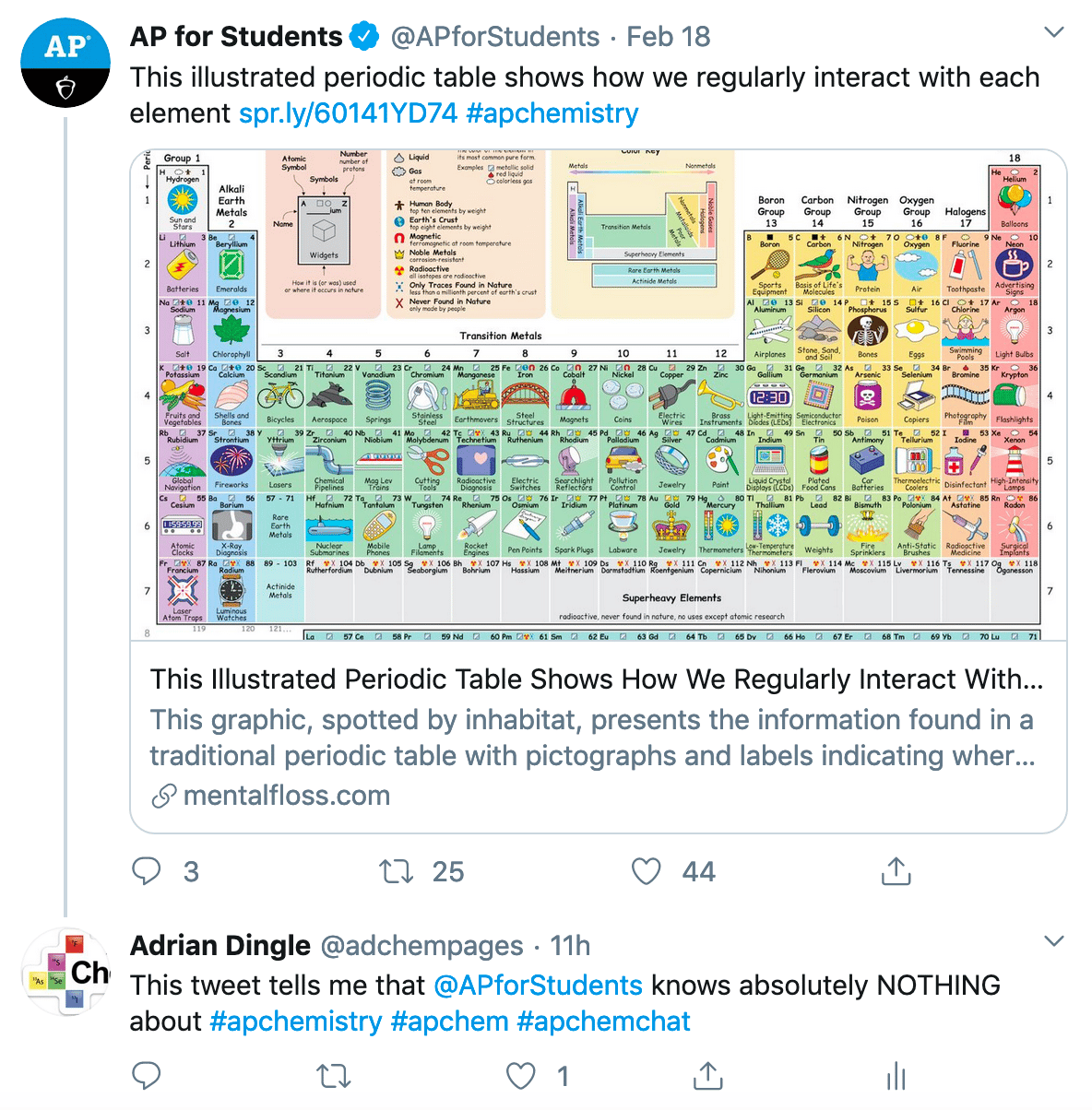 I don’t know who is manning the @APforStudents Twitter account, but if this tweet is anything to go by, then they know NOTHING about AP chemistry!

So what’s my point here? An opportunity to have a pop at the College Board? No, not really. I don’t care who runs that account, nor even why such an account exists (presumably it’s for marketing purposes). It’s not even my well-documented unhappiness that inorganic chemistry, i.e., the chemistry of the actual elements themselves is virtually non-existent in AP Chemistry that drives me here, rather there’s an entirely different reason for highlighting this. This tweet caught my eye because it’s so typical of prospective AP chemistry students, their parents, and educators who are clueless about the real academic rigor, and content involved.

Over the years I’ve heard countless kids say things like, “I love chemistry”, or “I love science”. At best this shows an almost total ignorance of what chemistry (or science) actually entails, and at worst it misleads them into taking an AP chemistry course that they believe is one thing when it’s actually something entirely different. What such statements usually boil down to is, “I like watching Bill Nye perform the elephant’s toothpaste demo on the Jimmy Fallon show‘, or, ‘I like to make red-cabbage indicator in a home school environment’. Sometimes parents will say, ‘Johnny has always enjoyed, and done well in science’. That statement generally comes with no notion of the fact that what they’ve done in a previous ‘science’ course, often has no bearing upon what’s about to bite them hard in AP.

AP chemistry is not ‘fun’ – at least not in the way that most people define that word. This is true on multiple levels, but here’s the truth. What’s ‘fun’ is the satisfaction, and scholarly stimulus that can be derived from a serious, intellectual pursuit, of a demanding subject that is most definitely not ‘for all’.

The simplest analogy is a sporting one. Winning the championship is certainly ‘fun’; the miserable two-a-days, stadium step running, repetitive drills, freezing cold practices, and coach baratements generally are not. Getting to win the championship is NOT easy, nor is it ‘fun’, but in the end, it’s worth it. AP chemistry is often not ‘fun’, and it’s not filled with elephant’s toothpaste demos and red cabbage indicators – if it is then something is wrong. The sooner that all parties realize that, the more satisfaction (via the acceptance of the reality of the situation), that they will derive from the true ‘fun’ of the (at sometimes) tremendous struggle. The struggle is hard, and that’s what makes it worth it – indeed that’s what makes it ‘fun’. I know this because it is very rare for a an AP student of mine to say, ‘this is fun’ when they are in my class. On the other hand, it’s almost without exception that they reflect after the event and say, ‘that was one of the most valuable educational experiences of my academic career’.