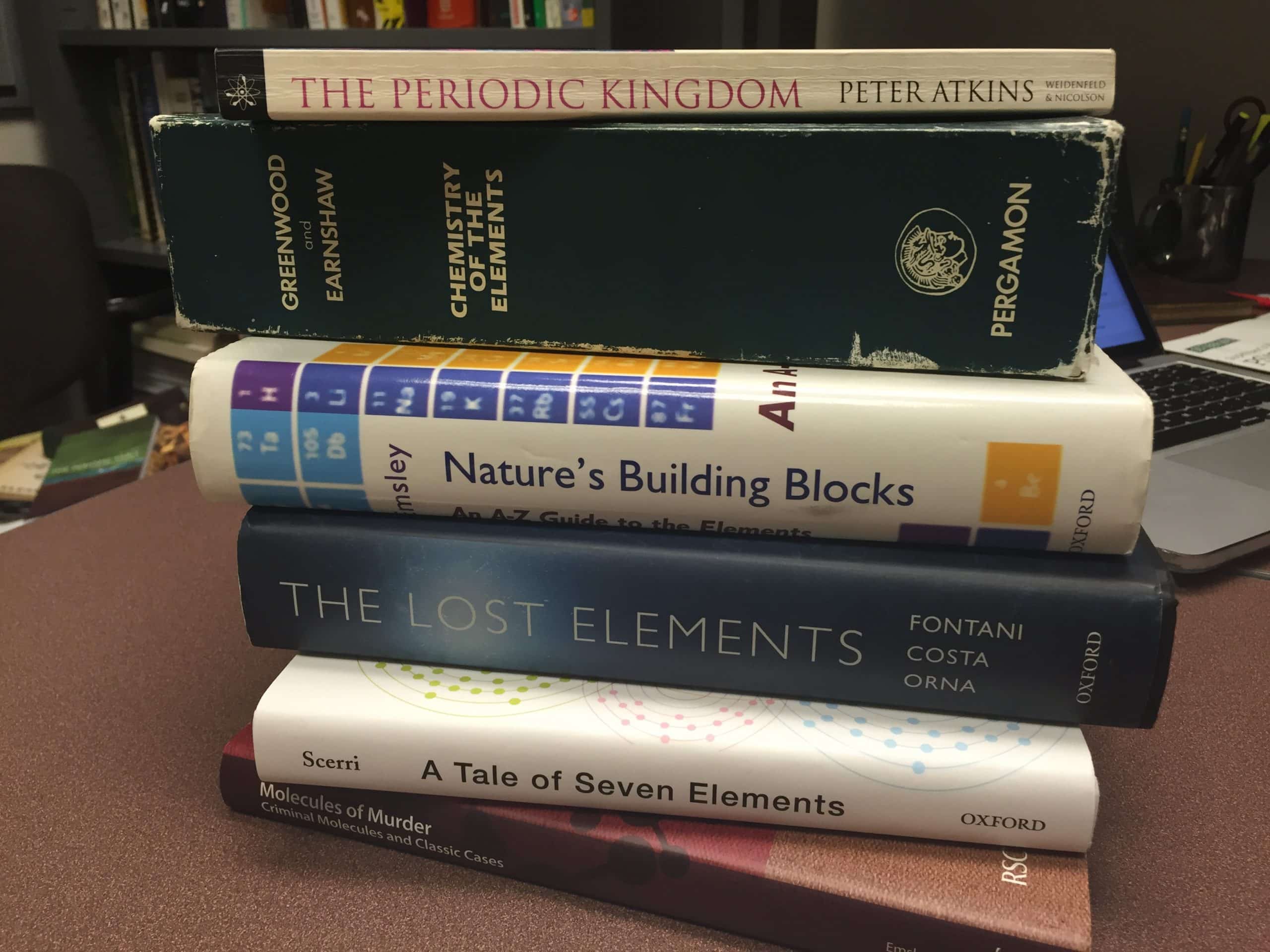 Here’s a book list for chemistry teachers inspired by Lowell Thomson, the globetrotting chemistry educator, as he throws down a challenge.

Actually his question is timely, as this topic has been on my mind a lot recently. It stems from my summer reading at CHF, and my current writing project adapting Sam Kean’s The Disappearing Spoon for a younger audience (that I concluded the first phase of this past weekend).

My guess is that the original list that Lowell refers to is one full of books of edubabble that I would rather burn than read – and he knows that, hence his pointed question about Chemistry in particular. If I may, I’d like to amend his question slightly, and remove the word ‘must’. I prefer a list that represents some really nice opportunities rather than a some kind of prescribed list of essential reading. If you want essential reading then I suggest, as a chemistry teacher, that you read several different textbooks. Why? Well there’s really no substitute for content knowledge, and I believe it’s the most important thing at the high school level (indeed all levels). Having said that, this list helps to give context to that body of knowledge, and of course that’s an important thing, too.

Some of these titles are not necessarily ‘easy’ reads. Whilst they are all some distance away from scientific papers, and they are written largely in lay language, you will certainly need both an intrinsic interest and a scientific training to get through them and to get something from them. Also, I’ve deliberately left off the books that teachers often recommend for supplemental high school reading, not because they aren’t fine reads, but because I view this list in a slightly different way. Those books, such as Sam Kean’s The Disappearing Spoon, Oliver Sacks’ Uncle Tungsten, Penny Le Couteur’s and Jay Burreson’s Napoleon’s Buttons, Theodore Gray’s The Elements, John Emsley’s Molecules at an Exhibition or even my own How To Make A Universe With 92 Ingredients and The Periodic Table: Elements With Style! for the younger crowd, are all books that I would recommend, but in a slightly different way. Those books can certainly be enjoyed by teachers and children, but I see my list as a slightly more technical one, based slightly less in VERY popular science, and more in slightly harder-core chemistry. One might argue that some that I do list below also fall into the softer category, and I might agree, thus proving that there is a fine line being trodden here.

OK, so here we go, in no particular order, a list of some of my favorite books on chemistry that are not textbooks. This is not a ‘Top Ten’ (not least of all because I didn’t list ten), and there are certainly a bunch more that I could add, but I think it’s a decent representation of some interesting reads. I’ll also freely admit that there is a distinct bias here that tends toward the periodic table, the elements and history, but that’s for a couple of reasons. These things have always interested me and are part of my current thinking, and the chemistry of the elements themselves is largely what all of chemistry is founded upon. The philosophy behind, the discovery of, the alchemy of, and ultimately the experimentation with, the elements, is where chemistry is based for me, so these reads represent important groundings in my opinion.

A Tale of Seven Elements. Eric Scerri. Along with John Emsley, Scerri is my favorite of all contemporary chemistry authors who dabble in popular science (each have two books on this list). Eric’s writing is based in pure chemistry, but offers philosophical insight. ‘7’ is a book that outlines the history behind elements discovered after Moseley’s formalization of atomic number, and the ‘completion’ of the periodic table up to element number 92. Like all history there are some wonderful tales of human interest amidst the chemistry.

The Transuranium People, The Inside Story. Darleane Hoffman, Al Ghiorso and Glenn Seaborg. This is a fascinating ‘behind the scenes’ look at the people and the stories that accompanied the most extraordinary nuclear age surrounding the discovery of the synthetic elements. There’s a decent amount of technical stuff, but it combines personal, often very human (and dare I say very ordinary) anecdotes, together with literally earth-shattering science!

The Lost Elements: The Periodic Table’s Shadow Side. Marco Fontani, Mariagrazia Costa and Mary Virginia Orna. This is an astonishing book – truly astonishing. The sheer amount of factual data is overwhelming in places, and the meticulous research is staggering. Having heard the story of how the book came to be directly from one of the authors Mary Virginia Orna, I was taken to an even higher level of respect than I had after first discovering and reading it. The book catalogs all the discoveries of all the ‘non-elements’. Those false starts, false claims, duplicates and purely bad scientific moments that seemed destined for the periodic table, but that floundered before they made it – an amazing book that is really an academic work. 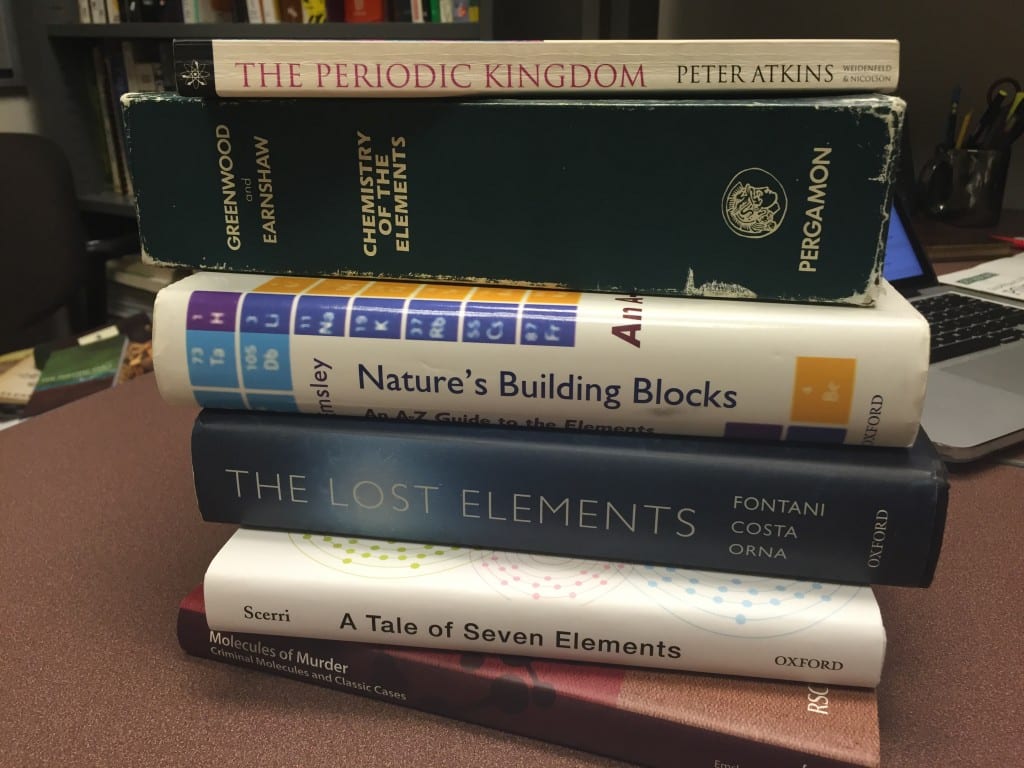 Nature’s Building Blocks: An A-Z Guide to the Elements. John Emsley. A one-stop shop for the down and dirty lowdown on each element, John brings the data together skillfully and, like the table itself, in an organized fashion. Listing each element with sub-headings such as Economic, Health, History, Environmental, Medical and even ‘Surprise’, Emsley gives us a window on a bunch of different aspects for each box on the periodic table. A great reference to dip into from time to time.

Chemistry of The Elements. Greenwood and Earnshaw. OK, I cheated, this actually IS a textbook but it’s really an indispensable one that you can dip in and out of to find out just about anything about inorganic chemistry that might ever interest you. It was my inorganic undergraduate text that was shamefully under used by me during those years, but since then I have developed a whole new respect and affinity for the book. Known affectionately be me and others as simply ‘the green brick’ (get a hold of copy to understand why), John Gelder, former AP Chemistry Chief Reader told me that he took this book to every AP reading to answer the trickiest of inorganic chemistry that arose during those gatherings. He has great taste!

The Periodic Table, its story and its significance. Eric Scerri. Put concisely, a neat and comprehensive account of  the philosophy and history behind periodic classification and the evolution of the periodic table from the beginning. Perhaps it’s just easier to say that this is much, much more than just Mendeleev!

Molecules of Murder, Criminal Molecules and Classic Cases. John Emsley. Case studies of murder and mayhem – what could be better? The stories are here, but there is also quite a lot of fairly hardcore chemistry surrounding those tales. I have to say that I was surprised by this book when I first read it, since it was more challenging that I first thought it might be. Having said that, it’s still packaged with John’s easy style and is a great read.

The Periodic Kingdom: A Journey into the Land of the Chemical Elements. Peter Atkins. Honestly, this is really a book about periodicity! Yeah, not especially stimulating I know, but Atkins intertwines a lot of chemistry around what otherwise might be dry explanations of atomic radii etc. Presented overall as a topological study, the book meanders around but still offers a lot of interesting angles that I hadn’t thought of when I first read it circa. 1998. A quick read and a good start to thinking about popular chemistry writing that has a factual edge.

The Cartoon Guide to Chemistry. Larry Gonick and Craig Criddle. Probably not a book that I would have included before I met Larry Gonick this summer, but having spoken with him and taken the time to look at the book, I found each, charming. The reason I like this book is simple. I bet, that if a chemistry teacher were to read this from cover to cover, that via the type of presentation that is provided here, that there would be at least one concept or idea that suddenly became much clearer because of the cartoon style. In that respect not only is this ‘fun’, it’s also a nice reminder that we all need a refresher and some more clarity on some really basic stuff from time to time.

Coming soon….when I get my Young Readers book about the history of the discovery of the elements published, maybe it will be on this list, too.

Well there it is. Certainly nothing definitive, but maybe a couple of less obvious titles along a starting point for some intellectual stimulation. Thanks for posing the question, Lowell.