Those confounded names and symbols!

Zach Weiner takes on the elements and the stress of the chemistry test in this, Saturday Morning Breakfast Cereal Strip.

Whilst reading Weiner’s cartoon I was reminded of the (somewhat old-fashioned and some would say outdated) terror of being asked to ‘memorize’ all of the symbols, for all of the elements, and the fact that this type of student task is generally frowned upon these days. For the record, like most high school chemistry teachers I do NOT ask my students to sit down and commit to memory ALL of the chemical symbols, but at the same time I have a somewhat old-fashioned and perhaps paradoxical take on this too. 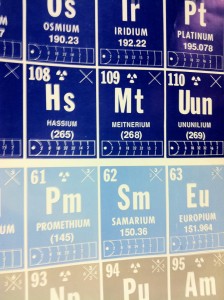 Competent, serious chemists do know most of the elements’ symbols, and as such why not ask kids to memorize as much as they possibly can? I’m not at all sure that we should be necessarily ‘rubbishing’ the idea that content knowledge (even if it is mundane and requires no ‘understanding’ as such) that sits between one’s ears but could also very easily be ‘Googled’, is necessarily a ‘bad’ thing. ‘Googling’ does not offer context or understanding either!

A lot of recent educational theory seems to suggest that such academic exercises are a waste of time and meaningless, given that they do not promote deeper understanding or problem solving. I would opine that the discipline and focus that committing such things to memory requires, are both worthwhile outcomes of ‘learning all of the elements and their symbols’. As such, all of my classes are asked to commit quite long lists of ions to memory, AND they are tested on that knowledge in a manner that if they have not mastered the list, that there will be a punitive effect on their grade – I think that’s fundamentally important.