Nomenclature. Stop worrying about it! 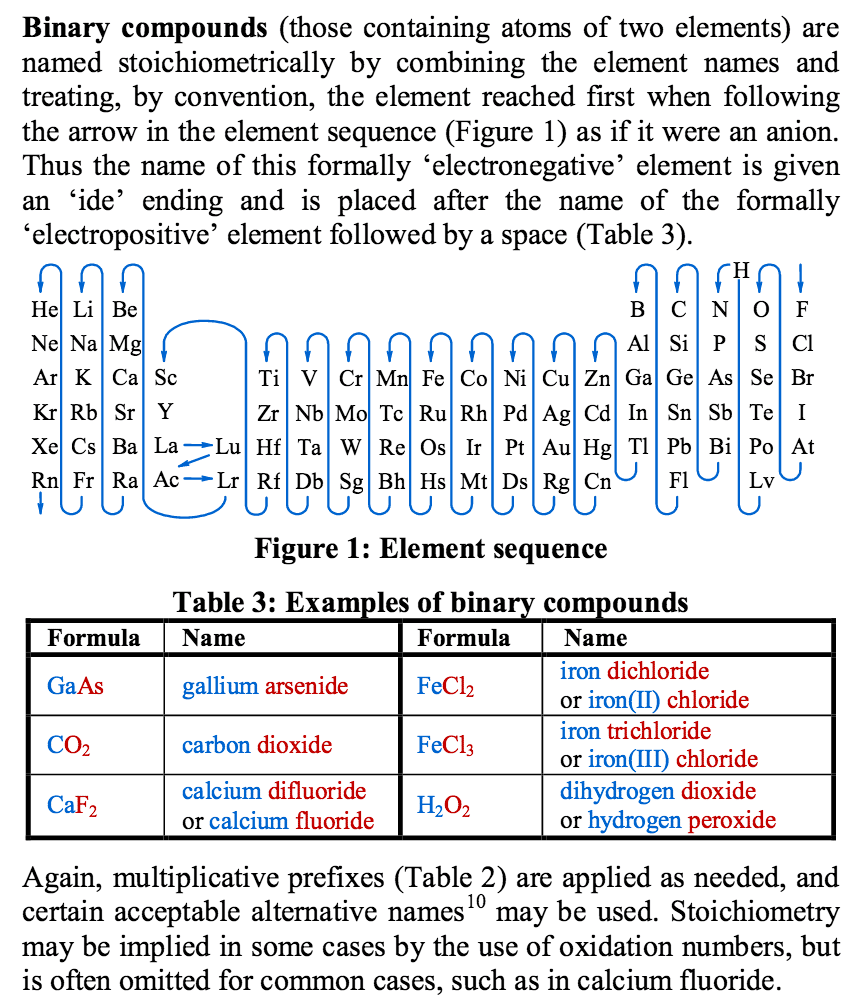 Is nomenclature important? Sure, as the ‘language’ of chemistry we really cannot do without it, and it’s also true that you’d better not mix up your sodium chloride with your sodium chlorate, but the truth is that it’s probably at lot less important in terms of teaching at the high school and college level than you think it is.

I recently saw this question on Twitter, posed by Derek Shackleford.

My blog posts are generally precipitated by a single thing (in this case Derek’s Tweets), but underlying them is often a much deeper thought process that simply reaches critical mass via that single thing. Anyway, suffice to say that nomenclature (in particular organic nomenclature), has been on my mind for many years and Derek’s tweets brought it to mind once more.

The key is that for most of us, nomenclature is really only a tool for communication and not an academic exercise in itself. Now, IF you work for IUPAC in assembling the Red and Blue (and other ‘colored’) Books that are the ‘bibles’ of nomenclature, then of course it is an academic exercise with a real and profound meaning of its own. But that’s a small group of individuals, and out in the world of high school chemistry teaching we are not necessarily dealing with the absolute, strict enforcement of rules*. For my perspective on this, take a look at these paragraphs that accompany my notes on organic nomenclature.

IMPORTANT NOTE: Some compounds have “trivial” or “common” names that have arisen from (among other reasons) their history and origins. In addition, there have been other attempts to produce a systematic nomenclature system before the IUPAC, for example, the Chemical Abstracts (CA). As a result, compounds often have several different, acceptable names, and the modern IUPAC name may not be (although perhaps it should be), the one most commonly used. Furthermore there are a number of inconsistencies that persist in the literature that have the potential to confuse. One such example is the positioning of locants. For example, strictly speaking (according to post 1993 IUPAC nomenclature), the “correct” name for CH3CH2CH2CH2OH is butan-1-ol. Despite this, many texts persist with the (pre-‘93) name 1-butanol. Although the first is “better” than the second, there is no ambiguity so they both exist and both are acceptable – lack of ambiguity is the key.

Since nomenclature is simply a system for communication, if a compound can be reasonably named in more than one way with no ambiguity, then different names are likely to be acceptable, as long as there is no specific insistence on the strict application of formal IUPAC nomenclature.

So, going back to the original tweets, and as Derek has subsequently observed, we are told by textbooks that we should ‘never’ use prefixes when dealing with binary compounds of metals and non-metals. Hence, we are told that it would be ‘wrong’ to call AlCl3 aluminum trichloride. However, based upon my own non-ambiguity principle above, it would be fine. Moreover, it would also be absolutely fine to call the compound aluminum(III) chloride as well as plain old aluminum chloride, since although we are told that Roman numerals should only be used in the case of metals that form multiple positive ions, and we know that Al commonly only forms one ion (3+), each of these names is unambiguous. (BTW, I am avoiding a conversation about the spelling of the name for element #13, here!)

OK, so that’s all well and good but should you be listening to/abiding by what I will call, ‘The Dingle Communication Non-ambiguity Principle‘. Well the answer is ‘yes’, but not because I say so, rather since it is actually not ‘my’ principle at all, and a version of it appears in the Red Book itself!

OK, so if you accept this fact I think that you have no choice but to accept that it makes aluminum trichloride entirely acceptable. If you feel a little uneasy about that, let’s dig a little deeper into the Red Book. In section IR-5.2 we find;

This text offers no restriction about binary compounds of metals and non-metals and prefixes that you find in most textbooks, and to cement that fact it is then followed by these examples, in particular take note of #7 and #10;

These examples probably upset your view of simple inorganic nomenclature as listed in your average school textbook, but you may take a little solace in what follows directly afterwards. The reason that the latter (rather than the former) name for #10 is more common, is that in the paragraph that follows these examples we find this sentence; “Multiplicative prefixes need not be used in binary names if there is no ambiguity about the stoichiometry of the compound (such as in Example 10 above).” However, that sentence in and of itself, does NOT make tricalcium diphosphide ‘wrong’. Mind blown!

Finally, consider the recently published IUPAC “Brief Guide of The Nomenclature of Inorganic Chemistry” and in particular the excerpt shown below.

This clearly states that calcium difluoride, iron dichloride and iron trichloride are entirely acceptable, once again probably rocking your world in terms of what most texts will tell you. If you check in the full version of the Red Book, you find this in section IR-1.5.2.

So, without claiming to be an expert on the subject of nomenclature I would argue that there is plenty of evidence to suggest aluminum trichloride is just fine, if not something that sits well with those who have been reading textbooks on the subject for years. I’m pretty happy with what is shown above, but it does create another question. If all of the above is evidence for aluminum trichloride being absolutely fine, then where did all of the rules about not using prefixes with binary compounds of metals and non-metals actually come from? That’s a question I’d like an answer to.

*NOTE: As Derek mentions, some tests and exams might insist on the application of certain ‘rules’ that make aluminum trichloride ‘wrong’, and if that’s the case I STRONGLY advise against challenging that particular norm!