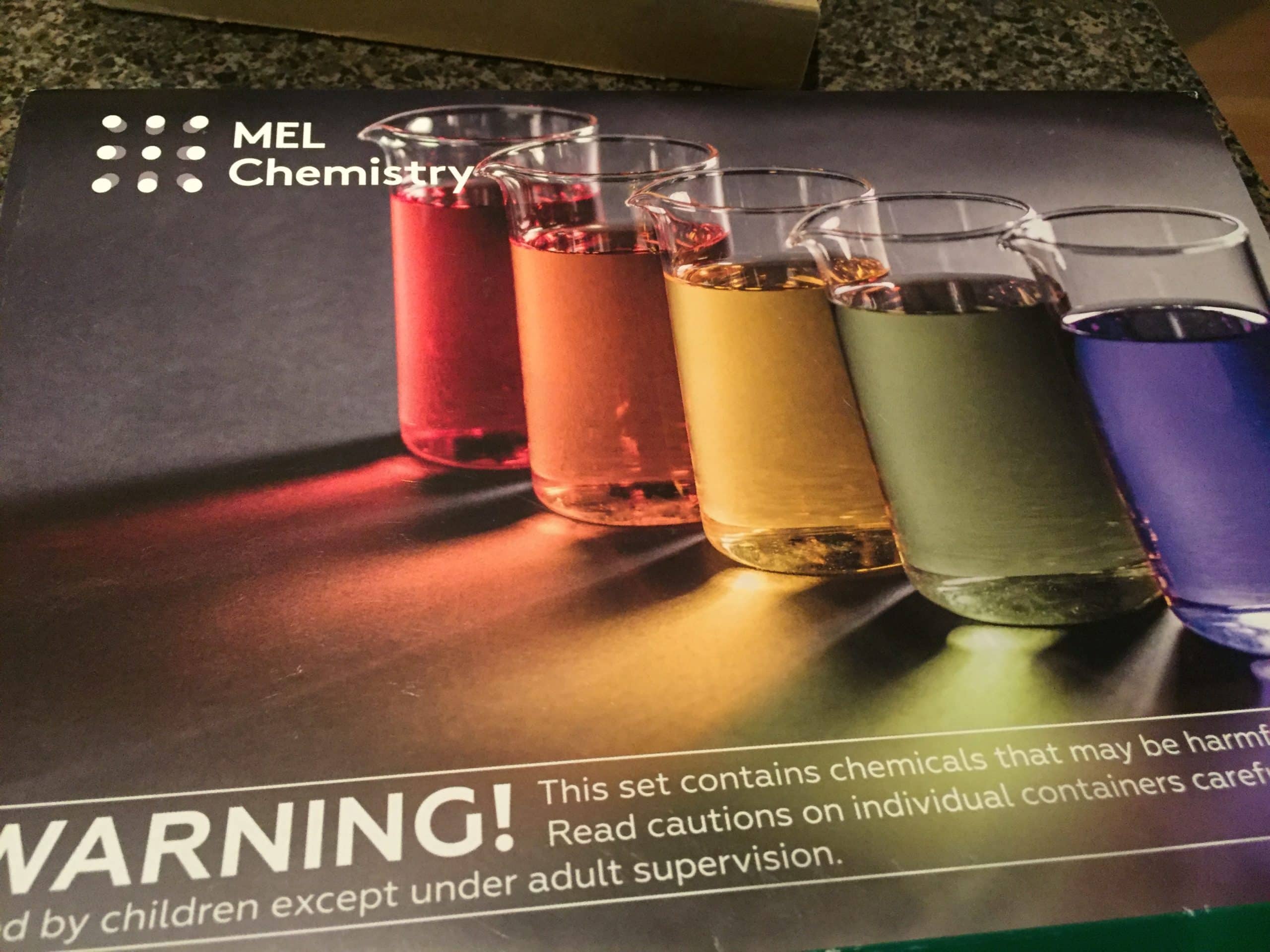 Chemistry hasn’t changed much over the years but now, with MEL Science, chemistry sets have – at least in some ways. Here’s MEL Science Reviewed.

Just to clear, I received no compensation from MEL other than the generous supply of a sample of their Starter Kit, and a number of the individual experiments for my review. I found their customer service to be excellent and responsive.

There’s a very sophisticated feel about the MEL Science chemistry sets. Actually, on second thoughts, sophisticated might not be the best word and perhaps comprehensive would be better one. Let me see if I can explain.

Honestly, there isn’t anything particularly sophisticated about adding a few drops of indicator to a number of different solutions and observing some pretty color changes. Nor is there much sophisticated about adding a solution of sodium pyrosulfite to iodine and observing the brown/black color disappear. There’s also something very unspectacular about an iodine diffusion experiment that takes 24 hours to develop. It’s not that any of those things are ‘bad’ chemistry, it’s just that they are not very inspiring – or at least not as inspiring as the MEL Science kits might at first suggest. In direct contrast to the simplicity of the experiments, MEL have succeeded in taking these somewhat pedestrian chemical ideas and turning them into what look like quite sophisticated entities, but that in most cases, they really aren’t!* And therein lies the problem for me. The sets are a wonderful piece of marketing and indeed engineering by MEL, but strangely, the presentation seems to outdo what a simple, home-based chemistry set can hope to deliver.

*Don’t get me wrong, I obviously understand that there ARE sophisticated REDOX reactions and indicator equilibria underlying the chemical reactions here, but of course, that’s not really what these kits are all about. 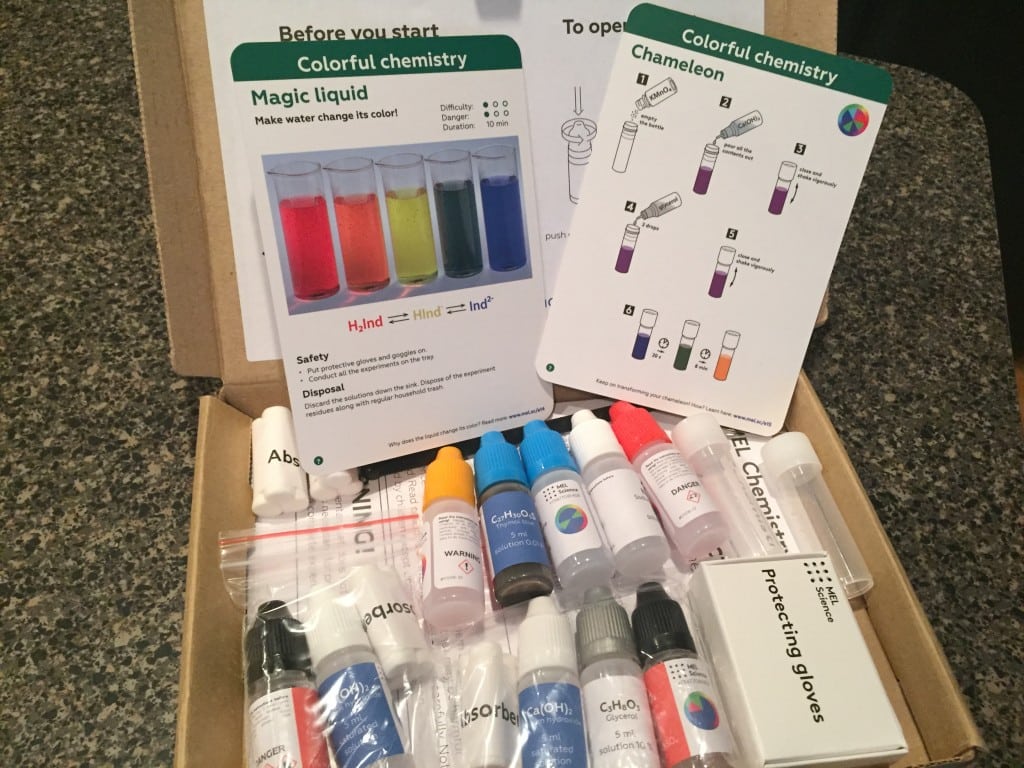 It’s really difficult to put my finger on it, but there seems to be a disconnect between the incredible detail of the digital elements, the presentation, the kits themselves and the app, and the simplicity of the experiments themselves. Maybe it’s just me being a bit jaded, but my 14 year old son also seemed quite underwhelmed with the actual experiments, too. For me, his was an interesting reaction, and I think that there are a couple of possible explanations. Either he is a little too old/sophisticated for the experiments, or perhaps, given the incredible promise that the initial presentation of the kits provide, the simple chemistry just cannot deliver! It’s a really odd situation where the chemistry seems unable to compete with the slick packaging and presentation. I should repeat that I think the presentation really IS excellent, and it’s not as if I think it is somehow misleading either, it’s almost as if it’s the fault of the chemistry, and it is what lets us down a bit! Oddly, I think the slick videos also do us a slight disservice here, take for example, the #magicliquid video.

Obviously this video, like all of the others, show the experiment working perfectly, with helpful, explanatory commentary and an intriguing musical soundtrack. Great, but when it comes to performing this in your kitchen, maybe the colors aren’t quite so bright; maybe the mechanics of preparing and pouring the solutions aren’t quite so pleasing; maybe with the soundtrack missing things seem a little less, well, ‘magical’! Like all of the videos, the problem is that they are almost too good; too comprehensive. They show the detail of the experiment almost in its entirety, and as such I am left wondering why I would bother to do the experiment at all, especially when it might be less than perfect when compared to the canned video, and when in any case, it’s not all that spectacular an experiment anyway.

As an experienced chemistry educator who is very familiar with GCSE, IB, A level and AP chemistry, i.e., basically a global perspective on the whole of 14-18 year old chemistry education, I think I might consider doing some hacking. How so? Well, by perhaps taking the chemistry (and by extension the kits), via some study questions and follow-up materials, to a new, higher level, and make theme align with some external, exam-based standards.

One such simple example would be taking the iodine and pyrosulfite reactions and explaining the REDOX chemistry, or perhaps extending the indicator equilibria into relevant, post-16 questions and/or explanations.

In summary these kits are absolutely beautifully put together (with the tiny exception of one of the rivets on the solid fuel stove breaking straight out of the box). In that respect MEL have got everything right (if you ignore the fact that some of the equations are not balanced – a pet peeve of mine – and that the periodic table in the manual that comes in the starter kit is not quite 100% up to speed with Fl and Lv missing). From the presentation, to the subscription model, to the marketing etc., almost every, single aspect of assembling them has been thought of. The web site with videos, the app, the meticulous labeling of the reagent bottles, the inclusion of a paperclip to allow one to puncture the sealed bottles (I could go on), this is exactly how a 21st century, home-based chemistry set should be put together, but there’s something that doesn’t quite add up for me. As far as this kind of kit goes there really is no doubt that the MEL kits are excellent, and I would highly recommend them for kids quite a bit younger than 12, but maybe the technology of 2015 has somehow outstripped the simple chemistry that is safe to do at home. MEL certainly have some ambitious plans in terms of the kits and maybe other kits will offer the kind of chemistry that matches the excellence of the non-chemical part of the package, bit for now there seems a gap between super-sophistication on one hand, and pedestrian chemistry on the other. Either way, this is definitely one to watch, and there is a huge amount of potential here.

Honestly I’m a bigger fan than the tone of some of the review above might suggest, and had the kits not specifically been aimed at the 12+ audience that MEL science suggest, perhaps my review would have taken a different tone. For now, on the basis of what I have seen, there is a slight disconnect, but I wouldn’t be surprised if in the future I were to re-write this review and it became significantly more favorable.