Well maybe not, but there seems to be a decent chance that at least two of the elements that are currently not formally recognized by IUPAC, could be on the brink of being added to the periodic table by having their discoveries officially confirmed.

If that were to happen, then the people credited with each discovery would be asked to propose names and symbols for the new elements. Once received, those suggestions would then enter an approximate six month period of review within the chemistry community, and then the current periodic table would need to be reprinted.

OK, so which elements are we talking about, and what is their current status?

In May of 2012, IUPAC (and its physics equivalent, IUPAP) formed the latest Joint Working Party (JWP) inviting the labs who are working on making these new elements to submit their current findings and claims. It is my understanding that the process has been near completion, and that the report from this JWP is ‘under review’, and will be released ‘later this year’. 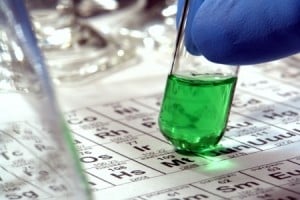 These are best considered as a pair, and you’ll see why when you read on.

113 was originally created as an alpha decay product of an experiment that created 115 in 2003, and the joint American and Russian team (sometimes referred to as Dubna-Livermore) announced this in 2004.

This was followed by a Japanese claim for 113 at RIKEN in both 2004, and in 2005, via an entirely different reaction than the Russian/American collaboration. Based on those claims from the first half of the 00’s, in 2011 (note, this was 8 years after the first experiment) the previous JWP (prior to the one that we are talking about publishing shortly), published their findings on 113 and 115. They concluded that in 2011 there was insufficient evidence for 113 and 115, and therefore the elements stayed in limbo. Here’s what they actually said (you may want to skip over this bit!);

On 113, JWP ASSESSMENT: The collaborations of Oganessian et al. at Dubna were essentially contemporaneous with those of Morita et al. at RIKEN. The results are encouraging but do not meet the criteria for discovery because of the paucity of events, the lack of connections to known nuclides, and the absence of cross-bombardments.

On 115, JWP ASSESSMENT: The Dubna-Livermore collaborations have reported a total of 23 events assigned either directly or indirectly to 288115 via a single target-projectile combination. The assignment is supported mostly by chemical studies of the terminal spontaneous fission assigned to Db-268. Those chemical studies serve a central role in whether or not the criteria of identification have been met. No carrier-free actinide tracers were employed despite the extremely complex oxidation chemistry and adsorption quirks of those Group 3 elements in contrast to lanthanide behavior. Chemical properties of confirmed heavy elements are important for improving relativistic theories of chemical behavior. However, by itself, current theory is sufficiently uncertain that it cannot be used to distinguish the properties of Groups 4 and 5 elements in this region with confidence.

In September of 2012 the Japanese at RIKEN reported another success in the synthesis of 113, but this was after the formal deadline for submissions to the current JWP in May of 2012. Since we are now over three years on from the original deadline for submissions, my assumption is that the 2012 data have been considered, since the JWP has been ‘thorough’ in its ‘considerations’.

The American-Russian joint team first reported on 117 in 2010, from an experiment that they conducted in 2009. They also reported in the same in 2012.

The GSI team in Darmstadt, Germany also reported on 117 in May of 2014, once again long after the original deadline for submissions, but still over a year ago, so maybe their work was also considered by the current JWP.

118 has a more tortuous history!

First claimed by the Americans and the rogue, Bulgarian nuclear scientist Victor Ninov in 1999, it turned out that data had been falsified and a retraction of the original claim had to be formally made in 2002. Ninov was humiliated (and fired). In 2006, the Americans and Russians made a new claim for 118.

118 was also considered in the 2011 report that rejected 113 and 115, and it too was considered unconfirmed at that time.

JWP ASSESSMENT: The three events reported for the Z = 118 isotope have very good internal
redundancy but with no anchor to known nuclei do not satisfy the criteria for discovery.

FWIW, my ‘educated’, but uniformed guess, is that 113 and 115 have a really strong chance of being confirmed in the report that is ‘under technical review’, and then they will be named by the late Spring of 2016. I think 117 and 118 are less likely at this point, but IMO neither can be completely ruled out this time around.

What about who will be given priority (credited with the discovery)? Well that’s difficult to tell, but in the post cold-war era, we see a LOT more political correctness and general neutrality, with most of the more recent credit being given jointly to multiple labs. To be fair, that’s fair too, since collaboration and data being independently confirmed and corroborated in many places is really the only way to get a reliable answer on the creation of these ‘super-heavyweights’. There also seems to be a certain, ‘spreading of the wealth’ of late, which leads me to think that we will see significant RIKEN credit on 113 and 115 whenever they are finally confirmed. Also, I wouldn’t mind betting that the RIKEN team get a chance to name one of those elements. If they do there are already some ideas that have been floated for 113 including japonium, rikenium and nishinanium.