Higher standards in class than the AP Chemistry exam 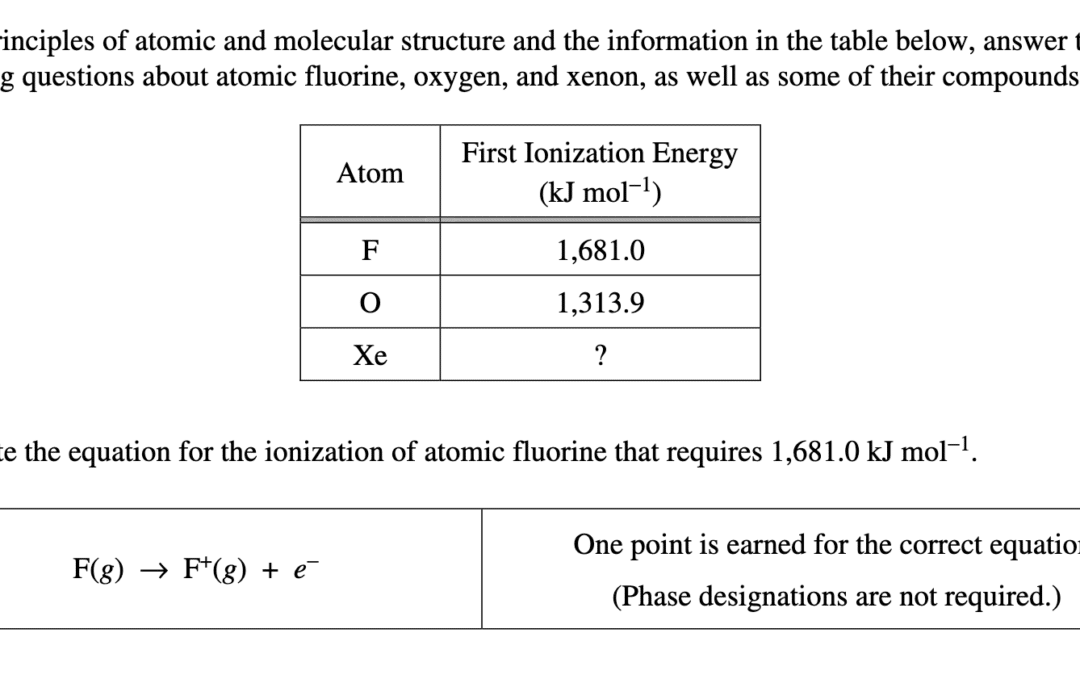 It’s very easy to say, “I’m holding my AP chemistry students to a high standard” without ever quantifying that statement. However, without some kind of evidence the assertion no more than a meaningless platitude. I think that I do live that mantra every day, and here are just a couple of simple examples – related to content of course – of how I do that.

Before I get into the detail, what I am about to explain literally goes beyond what the kids would be asked to do on the AP exam, but still in the context of relevant content. As many of you will know, I am obsessed with focusing my teaching in AP chemistry to that which is relevant to the exam. These examples do not contradict that philosophy, rather they give examples of where some subtle tweaking can create the ‘higher standards’ that I’m talking about in the title of this post, and can lead to kids losing fewer points.

The first example comes from 2009, 6(a)(ii). The question and the official scoring standard are shown below.

So how do I grade this question? Simple. An answer like the one shown above only gets partial credit from me (and yes, I know that 1/2 points are not given on the exam). Additionally, I insist that there is mention of the fact that both species SPECIFICALLY have the same number of protons (which is of course same as ‘nuclear charge’), but I believe this helps kids to focus on the number of protons, AND the relevant other factor when dealing with size, and ionization energy explanations, making their understanding improve, and with it, their written answers to similar problems. This distinction between ‘nuclear charge’ and protons is subtle, perhaps meaningless to some, but I’ve seen it make a difference to the kids’ thinking.

The second example comes from 2008, 5(a) and is perhaps less subtle. The question and the official scoring standard are again shown below.

Easier to tweak here. Insist that the state symbols ARE include, and make it a two point question. This serves the same purpose as above (stretching and asking the kids to be ‘better’ than they will actually need to be in May), but also serves my own belief that such a question should absolutely include state symbols because that’s part of the definition. In the context of the AP exam, the second point is less important!

These are just two examples amongst countless others where I push the students to give me a little more that may be required. That means that the ones that consistently do that, tend to give more complete answers, perhaps that give slightly more information than they need, but ones that never lose points. That can be be the difference between a 4 and a 5.

I suppose the final thought is this. Why hold kids to a higher standard than the exam does? Simple. Most kids that I teach leave the AP chemistry exam in May saying that it was one of the easier they things that they did all year. The pain ultimately pays off.

The examples above are both from the periodicity topic, and you can read more about writing good answers to AP chemistry periodicity problems here.