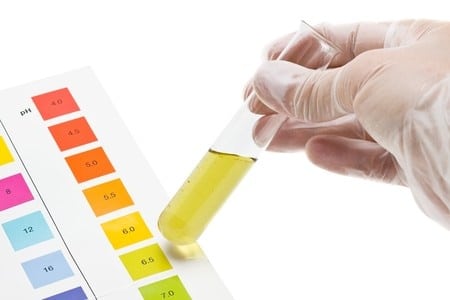 It’s probably the toughest topic on the exam for students, or at least it seems to be, so here are a few pointers that might help when answering questions on acid and bases on the AP chemistry exam. 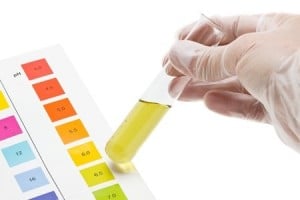 2. Significant figures on pH problems may not ever be an issue (mainly because the College Board is in a complete mess when it comes to significant figures with no official word on how they will be treated – see this and this), BUT if you want to get sig figs in pH calculations correct, see this.

3. When asked to write a Ka (or Kb) expression, don’t jump directly to the [H3O+] or [OH–] squared numerator. They don’t like that. e.g., for the reaction

Even though they are numerically the same thing, and the second one will be the one that you effectively use when doing any kind of calculation on the weak acid, always write the top one first.

4. If you decide to neglect the degree to which a weak aid or base ionizes, i.e., you treat the ‘x’ decrease of the moles of the weak acid or base as negligible in order to avoid a quadratic, then SAY so! Tell the examiner you have left it out on purpose. (As an aside, occasionally you’ll come across a problem where you may be given the ‘x’ value and in that case I would tend to include it in the calculation of the equilibrium moles of the weak acid or base).

5. Increasingly (perhaps even always), it’s not going to be sufficient to justify/explain why when a weak acid or weak base is involved in a titration, that the pH at the equivalence point is not 7 by simply saying “the strong acid (or base) ‘wins'”. Obviously this was never really an explanation anyway. You should always reference the relevant hydrolysis reaction and increasingly likely IMO, you may have to write said reaction.

For example, when ethanoic acid has been completely neutralized by a strong base, the resulting salt (the ethanoate) will hydrolyze at the equivalence point according to the equation below, thus making the solution basic at this point.

7. Another emphasis (that is essentially the SAME as #6 above) seems to be that there should be a qualitative understanding (rather than actually plotting a bunch of pH values on a pH curve), that the pH during the titration of a weak acid or weak base with a strong base or strong acid, varies only by about 1 unit for about 80% of the buffer region, with larger changes at the beginning and end of that region where ratios of salt:acid are relatively far from 1, and close to horizontal near the middle of the region where the ratio of salt to acid is close to 1.

8. Don’t make the mistake of thinking that Kw = (Ka)(Kb) for any, random weak acid and weak base – they have to be a conjugate pair! I’ve seen it, trust me!

9. Another new emphasis is the idea that neutrality is based upon the relative concentrations of hydroxide and hydronium ions, and NOT the pH. Only at 298 K (when Kw = 1 x 10-14) is a pH of 7 considered neutral, and in all situations you should be comparing [OH–] with [H3O+] to determine the acidity, basicity or neutrality of the solution.